The History of Townsend Farm

A subject that could take a lifetime to explore, discover and understand, however for the purpose of this introduction, I will share what I could find. Of course the history of Townsend farm will be entwined in the history of Brampton Abbotts as a village, so I have tried to ‘unpick’ the relevant information to build a history of the farm.

A very fortunate chance find of a fantastically preserved knapped arrowhead was found by myself by Monks grove `wood back in 2012 (see photograph).  An incredible find for many reasons but not least the nearest flint deposits would be over 40 miles away. 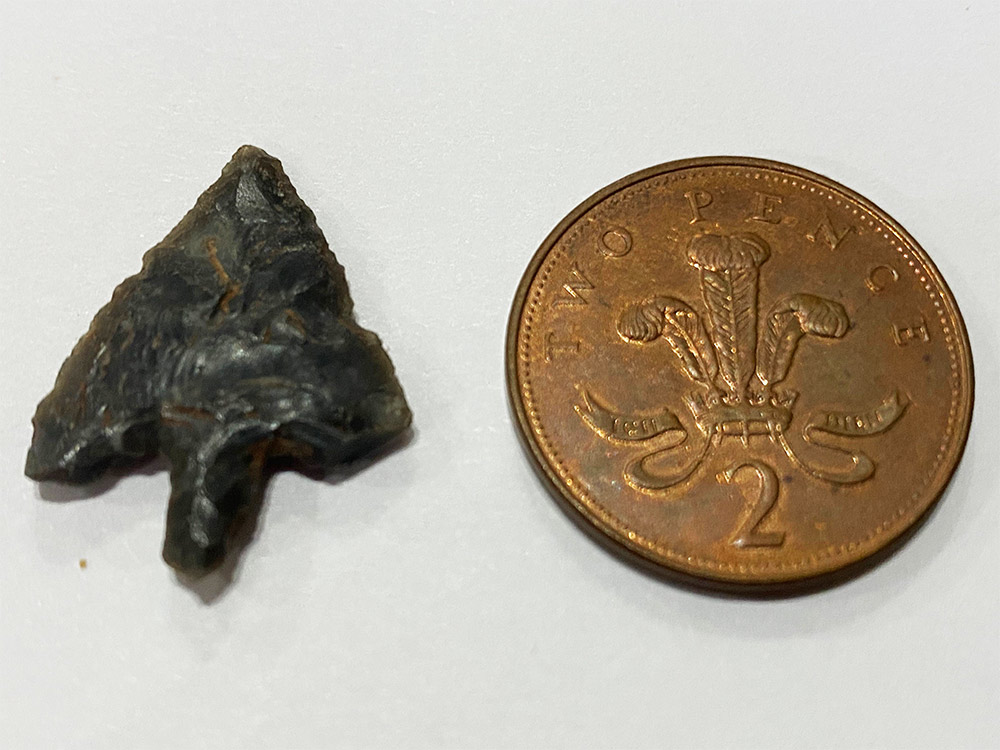 Yet another fortunate find was the bronze aged axe head found in the field we call Orralls, not surprising when you consider its proximity to the river and a freshwater spring that fails to dry up even in the driest of summers,

There is also evidence of bronze aged settlements to the east of Monks grove, where 2 circular enclosures are very evident on aerial photographs as can be seen highlighted. 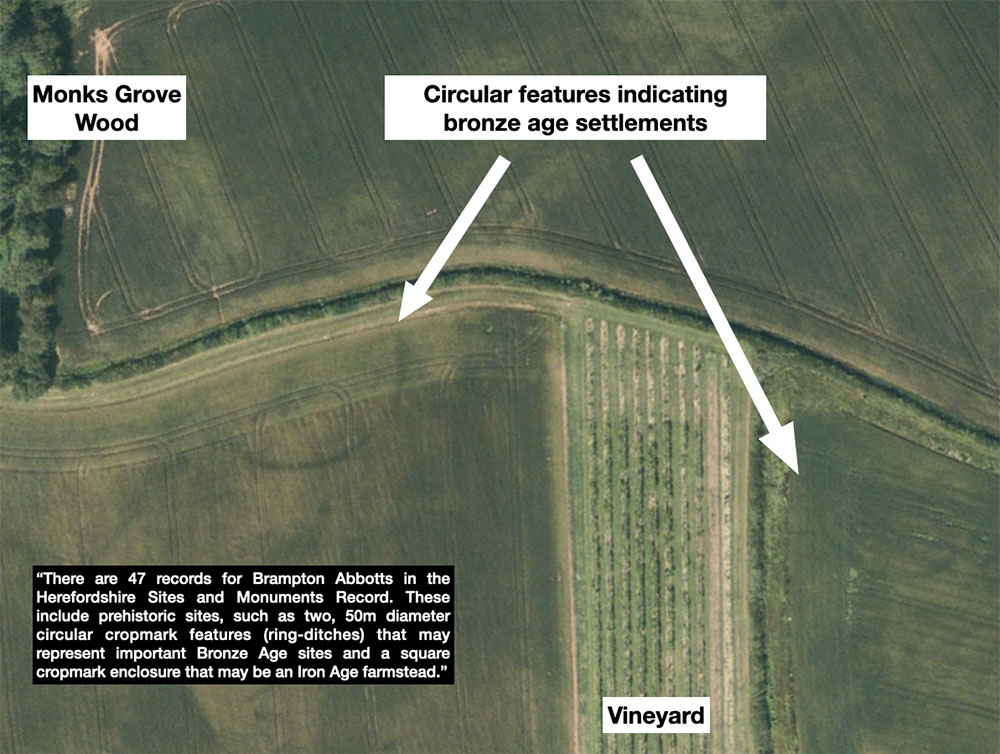 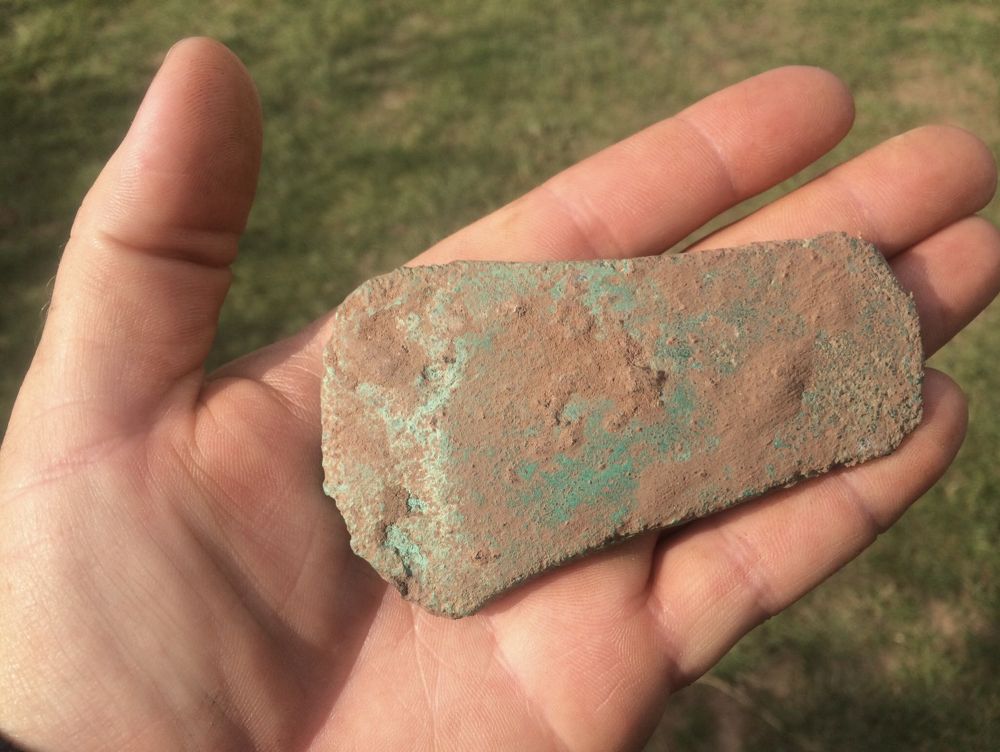 A brief mention of a more square enclosure indicating more Iron age than bronze age shows up exceptionally well during a drought year and 2020 was no exception – here in the field we call Pyes Oak. 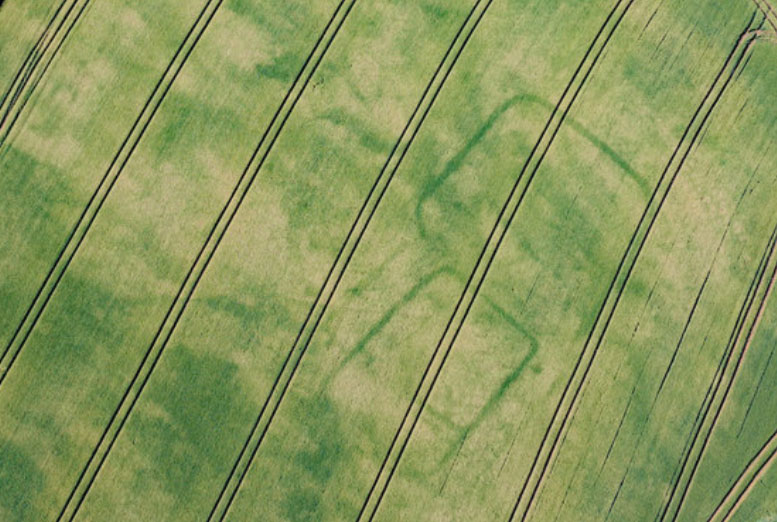 The greatest evidence we have of the Romans being here is the documented settlement of the next-door farm ‘Overton’ just over the hedge from the field that has the bronze age crop circles. We have also found Roman coins, pottery and the Roman broach as photographed. 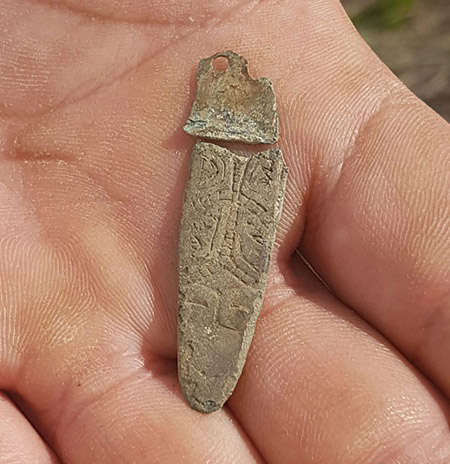 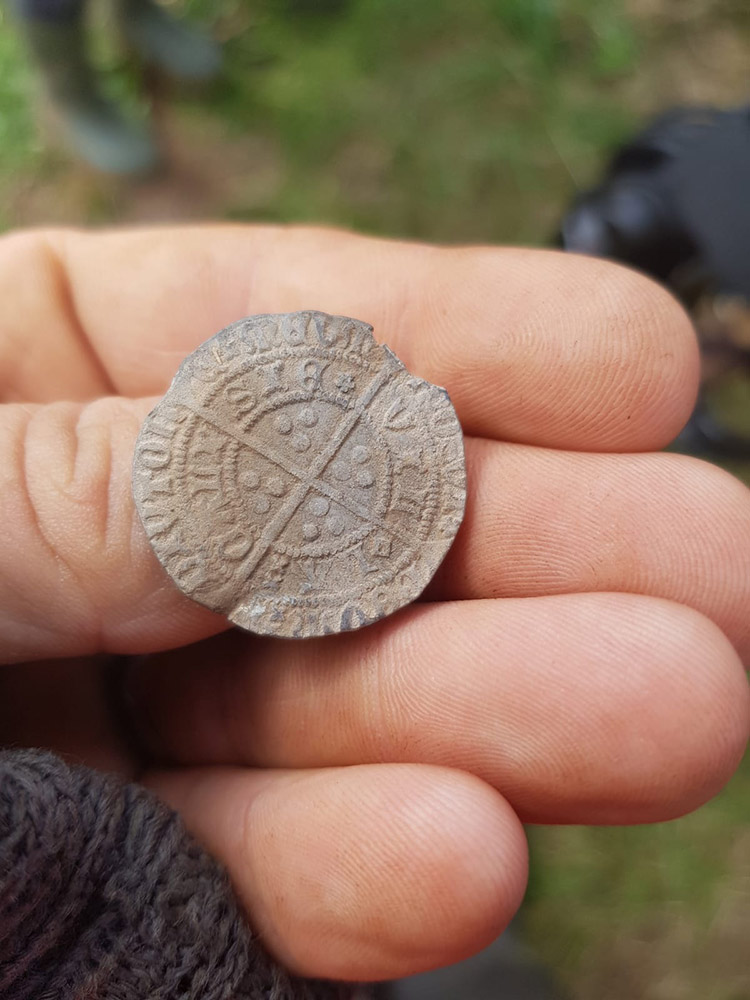 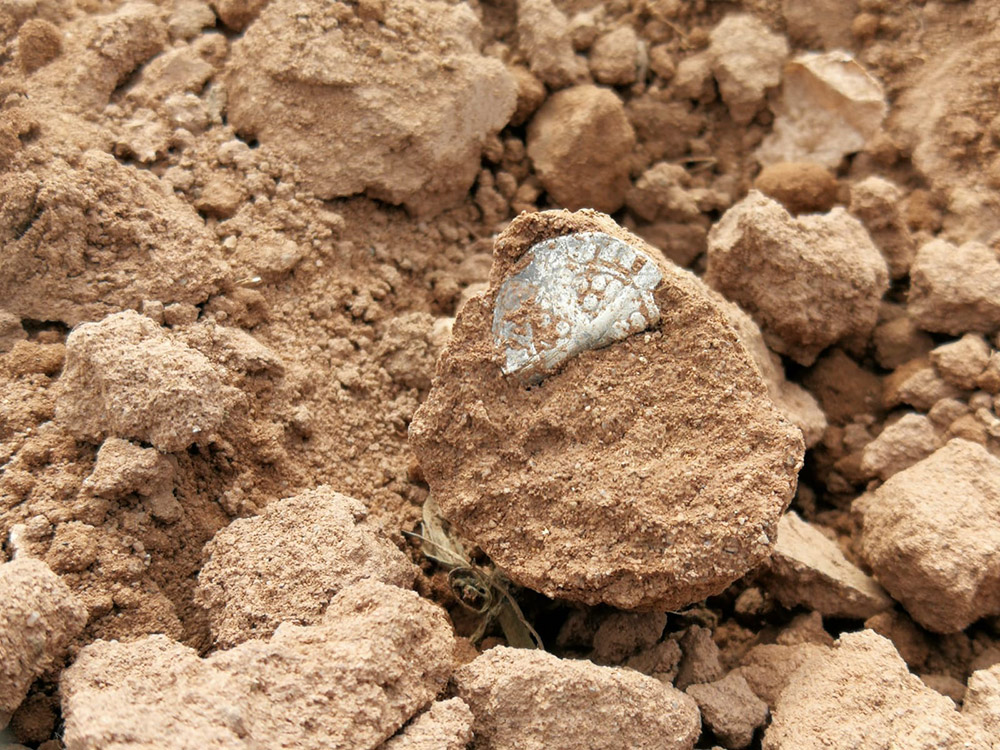 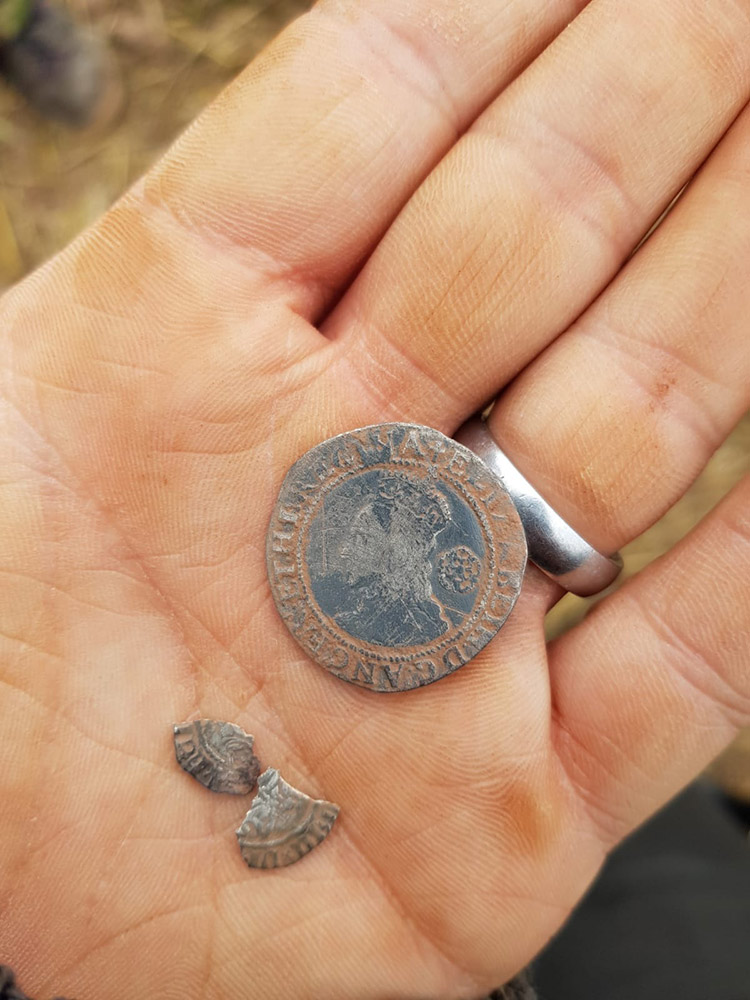 The place-name Brampton means ‘Broom settlement’. Abbotts is a reference to the abbot of St Peter’s Abbey, Gloucester which held it in the late 11th century at the time of the Domesday survey.

At Domesday, there were two hides one of which paid tax and one which did not. In the free hide, there were three ploughs in lordship. There were also five villeins and five bordars with five ploughs together with sixteen slaves.

In the other hide there was one villein and one bordar with one plough and a mill valued at eight shillings.

Another part of Brampton was held by the monastery of St Guthlac in Hereford. The marginal entry in the Herefordshire Domesday is Gadelesford suggesting that this property was at Gatsford, 1600 metres east of Brampton Abbot’s church. The name Gatsford is perhaps ‘Gæddel’s ford’. The property was waste although it did pay tax. There was said to be land for two ploughs.

At the time of the dissolution, Brampton Abbotts was granted to the Rudhall family of Rudhall in the extreme south-east of the parish. The first mention of the family is in 1306 when William Roedale leased some land and an adjoining mill from the Abbot of Gloucester.

In the assessment of wealth for taxation carried out under Henry VIII’s Subsidy Act of 1523, John Rudhall is easily the wealthiest person in the township

Wilfords Green is situated on the river bank is approached by two ancient trackways suggest a ford crossing, which was probably crossed by the Welsh from Archenfield in the mid 12th century when they raided Brampton Abbotts (Perhaps the name derives from ‘Welsh’ ford?

Brampton Abbotts was held by St Peter’s Abbey in Gloucester with another portion held by St Guthlac’s Priory in Hereford until the Dissolution. The principal landowners in the mid C19th were Lord Ashburton and the Dews. The church dedicated to St Michael dates from the Norman period, and the original Victorian school has been converted into a dwelling when the school moved into the outskirts of Ross. The landscape has changed dramatically since the mid C19th small fields and strips have been enlarged into huge arable fields

The ‘Withy Beds’ of 1829 (Field still has the same name) was once used for basket making and to be honest could still be with the amount of willow that grows if less undisturbed for any length of time.

1836 Tithe Act – The term tithe map is usually applied to a map of an English or Welsh parish or township, prepared following the Tithe Commutation Act 1836. This act allowed tithes to be paid in cash rather than goods. The map and its accompanying schedule gave the names of all owners and occupiers of land in the parish.

The payment of one tenth of local produce to the church had been established in Anglo-Saxon England before the Norman Conquest. This was originally in kind: every tenth stook of corn, etc. It originally supported the local priest, but in some cases the right to receive the tithe was acquired by an organisation such as a monastery or college, who paid a curate. With the dissolution of the monasteries, the right to receive tithes was acquired by a number of private landlords. In some instances, a tithe barn was built to hold the tithes. Tithes themselves were controversial, particularly among nonconformists who resented supporting the established church;[2] and payment in kind was sometimes not convenient for either the farmer or the tithe owner.

Over time, in some parishes, the tithe owner came to an agreement with the tithe payers to receive cash instead of farm produce. This could be for a fixed period of time or indefinitely.[3] During the period of parliamentary enclosure, the various Inclosure Acts abolished tithes in many places in return for an allocation of land to the tithe owner. However, in many parishes, tithes continued to be paid in kind.

Geoff Gwatkin of Ross-on-Wye http://www.geoffgwatkinmaps.co.uk draws and sells Tithe maps and I was thrilled at what he produced for us showing Townsend Farm in 1838.

Townsend Farm was originally sited further to the east and was owned by the the prominent local family, the Scudamores, in the 18th century. It was later purchased by Lord Ashburton and between 1838 and 1888 was moved to its present site.

Townsend Farm was sold in 1890 as ‘A Superior Farm Residence containing on the UPPER FLOOR (to which there are two staircases), 5 Bed Rooms and Store Room; on the GROUND FLOOR, Entrance Hall, 3 pleasant Sitting Rooms, Kitchen and Back Kitchen; Cellar in Basement’ together with an extensive range of farm buildings and the Cot buildings near the Wye.

Benefiting from the exceptional engineering prowess of Isambard Kingdom Brunel, the Hereford, Ross & Gloucester Railway (HR&GR) plotted a 22½-mile course from Grange Court Junction to Hereford, up the Wye valley, through Townsend farm. Construction was enabled by an Act which overcame its last Parliamentary hurdle on 12th June 1851, although the route had been surveyed as part of previous schemes as early as 1844.

A partnership of Thomas Brassey, Morton Peto and Edward Betts signed contracts to execute the works at a total value of £230,000. The route was built for a single broad-gauge line with an intermediate passing loop at Ross-on-Wye. The track was laid with Barlow’s patent 20-foot rails, shaped like an inverted ‘V’ and weighing 90lbs per yard. These were sunk into the ballast and secured with transverse iron ties at each end.

Trains began serving a temporary terminus at Hopeswood – five miles up the line from Grange Court – on 11th July 1853. However the section northwards proved particularly challenging due to the meandering River Wye – which it crossed four times – and intervening spurs of high ground, requiring four tunnels with a collective length of 2,626 yards. The average gradient was 1:70. In total, 36 bridges had to be built, 14 over and 22 under the railway.

Whilst good progress was generally made with the river viaducts at Backney (Townsend Farm), Strangford and Carey, heavy rainfall and an associated rapid change in water level could bring setbacks. Captain Henry Tyler inspected the line for the Board of Trade over two days in May 1855. He described the river viaducts as being “constructed of trussed timber beams, supported on stone piers and abutments, and braced by wrought iron tension rods, 1½” in diameter.” Each structure comprised six 44-foot spans. To test them, two tank engines – named Theocritus and Buffalo – were provided by the railway company, their combined weight being 63 tons and a length of 53 feet between buffer planks.

Tyler observed that “with this load, deflections were ordinarily produced in the beams of 0.24 inches, but, in some cases, in which it was evident that the iron bolts required to be screwed up, as much as 0.42 inches, and, in one case, 0.48 inches. An order was given in my presence for the tightening up of all the bolts of these viaducts; and though I should have preferred to see them of wrought iron rather than of wood, I have no doubt of their stability, as long as the timber continues to be sound and the bolts are kept to their proper strain.”

A formal ceremony to open the through line to Hereford took place on 1st June 1855; the inaugural train – sporting a Union Jack on its funnel – was greeted in Ross by a crowd of 5,000 townsfolk. The HR&GR amalgamated with the Great Western Railway in July 1862, the latter taking on responsibility for operating the line and receiving 60% of the receipts for its troubles.
The line was converted from broad to standard gauge over five days in the middle of August 1869.

As was the case elsewhere, deterioration of the viaducts’ timberwork eventually prompted its replacement. It seems likely that this was effected during 1898 and necessitated raising the pier height by several feet, adding sections of brickwork above the existing masonry. Some of the piers were either partly or wholly encased in concrete.

Severe winter floods in 1867 had provoked some concern for the stability of Backney Viaduct, but one of the piers of Strangford Viaduct did collapse in March 1947, water currents having undermined it. The two spans it supported were brought down as a consequence. Repair work took several months and was completed without the need to rebuild the lost pier, a longer span being installed instead.

A memorial cross marks a tragic incident that occurred in 1904 when the Rev. Harry St. Helier Evans lost his life saving two children who had been swept away towards Backney Bridge. Upstream are the overgrown Withy Beds, where withies were cut for basket making.

In 1941 the Ministry of Agriculture surveyed this farm under the tenancy of J Snell who farmed 552 acres with 9 workers. Apart from the arable there was grazing for 133 cattle, 407 sheep, 70 pigs, 450 fowl and 13 horses.

Much of the modern history of the village and the farm can be traced to J C Snell and his huge contribution to the book ‘Brampton Abbotts Parish, our village in living memory’ written in 1954. 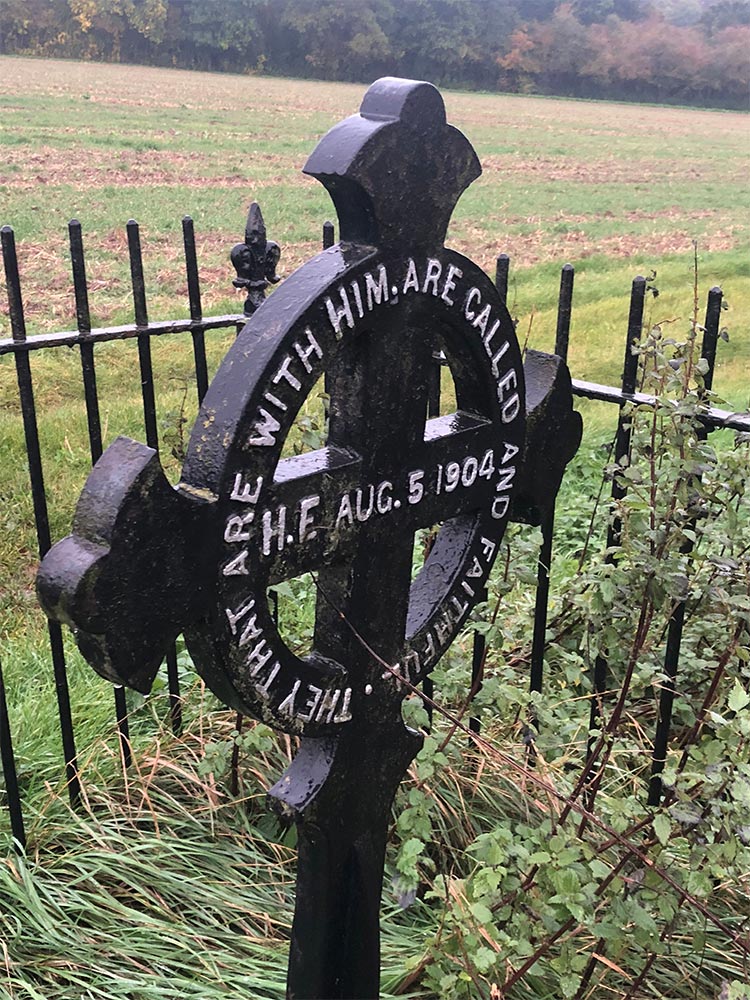 Click on the images to read through the photographed entries. 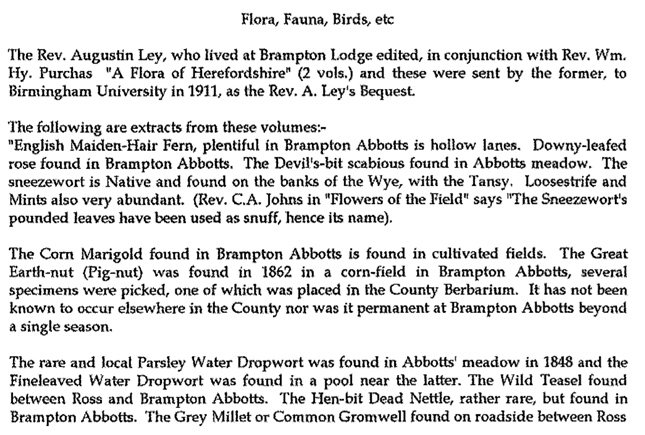 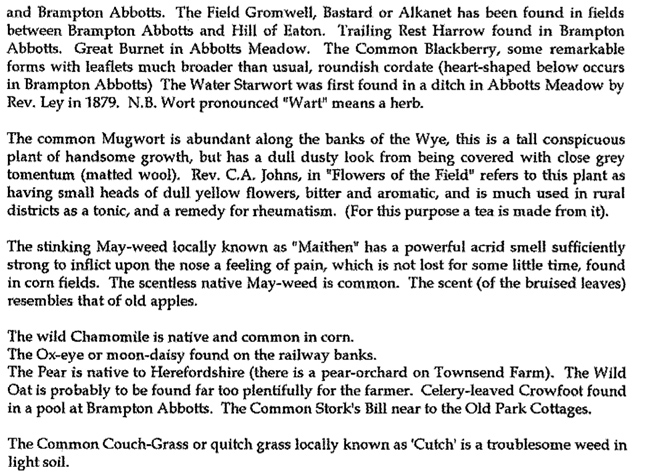 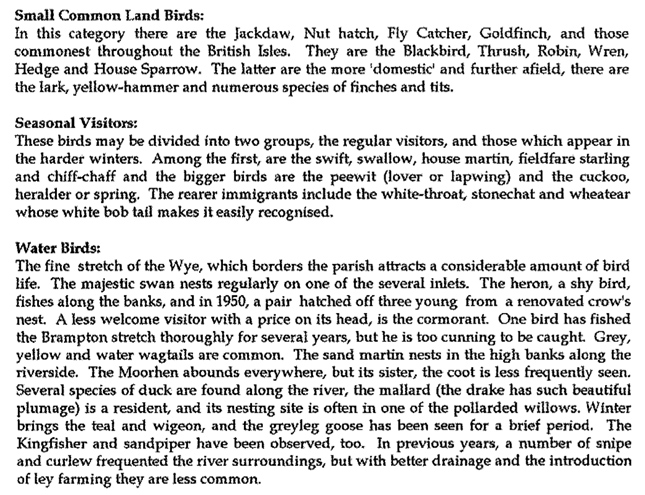 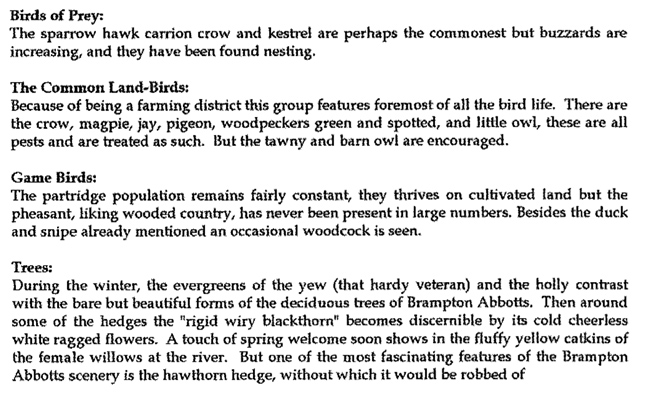 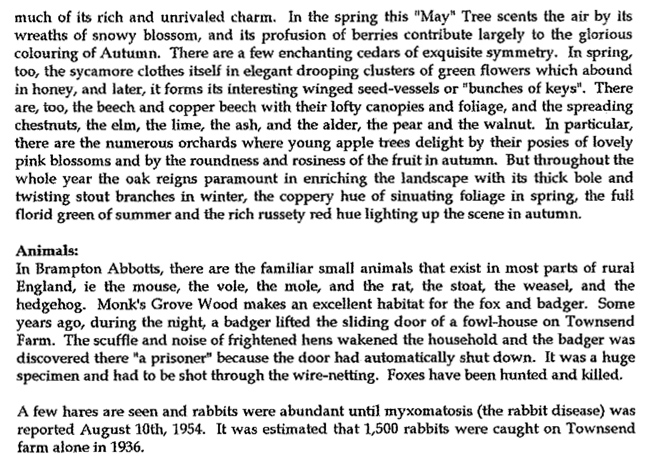 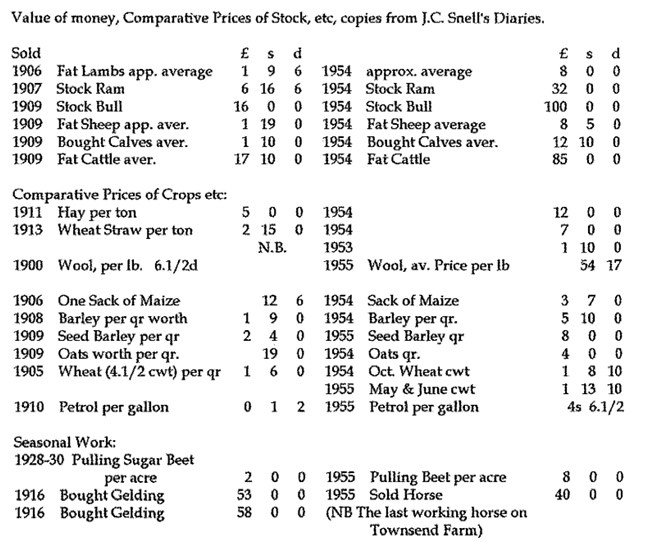 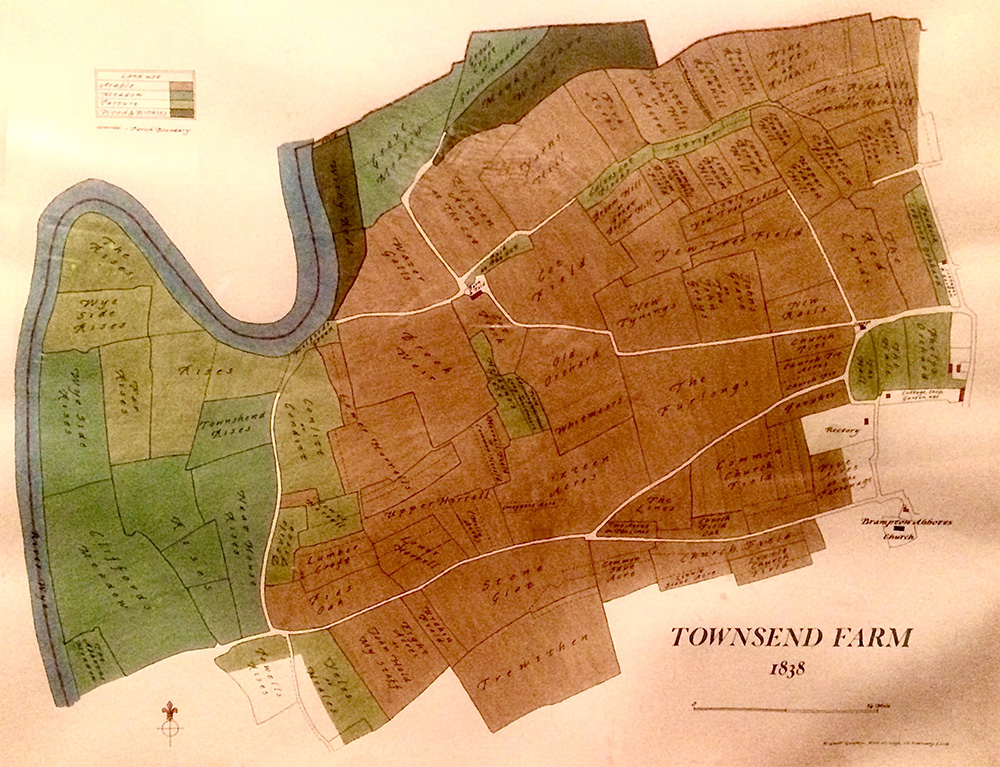 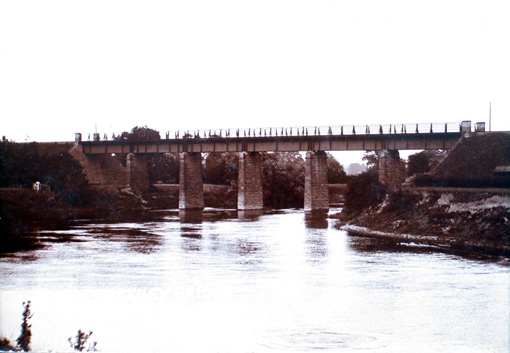 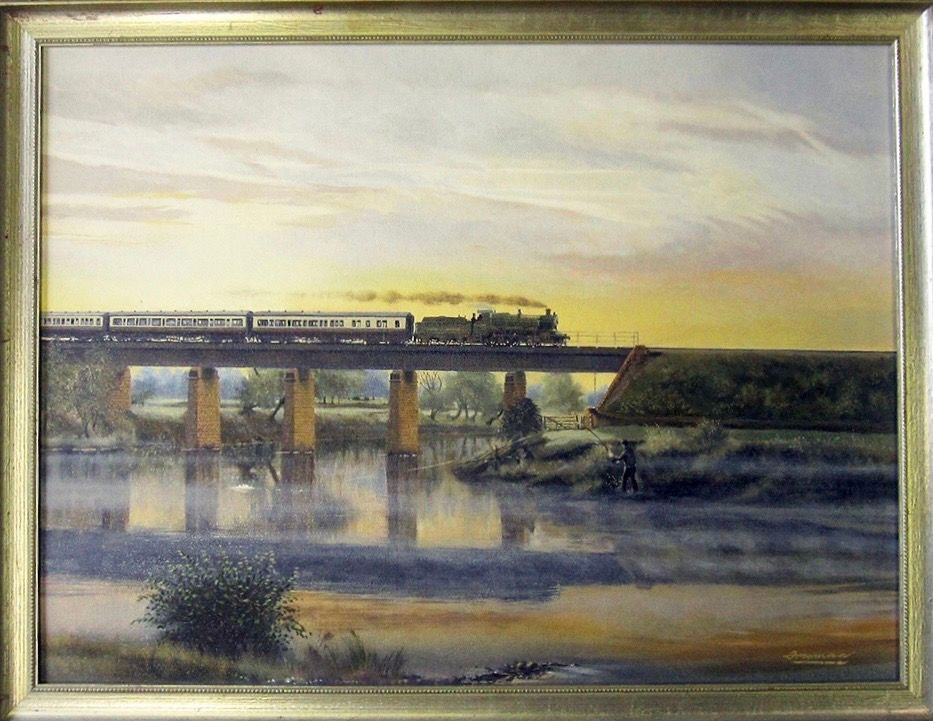 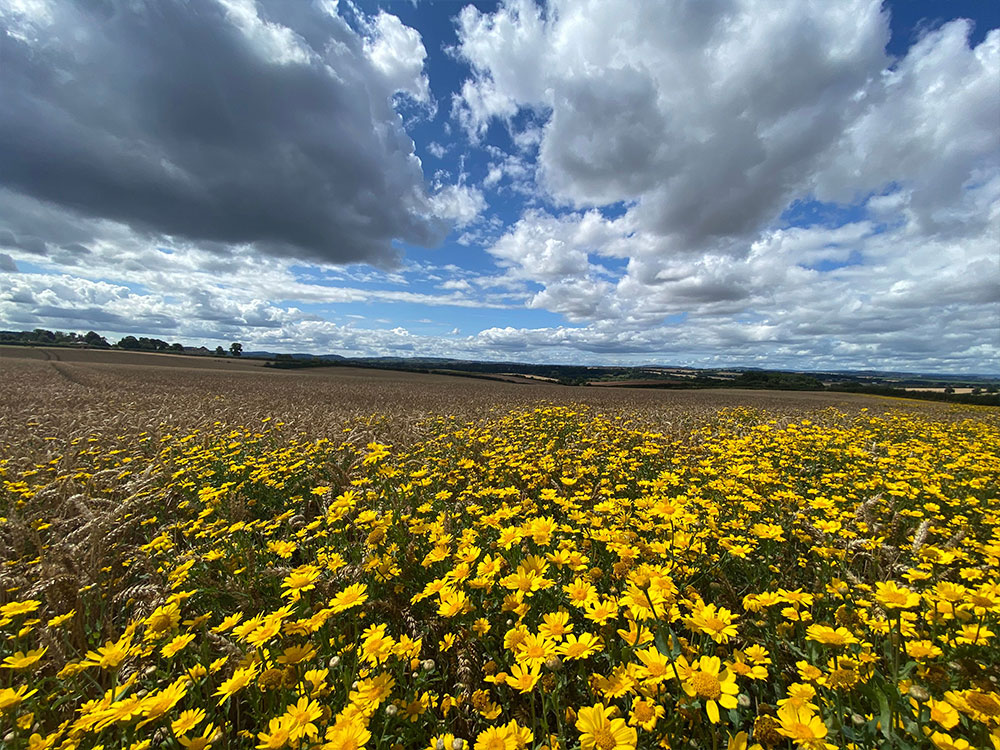 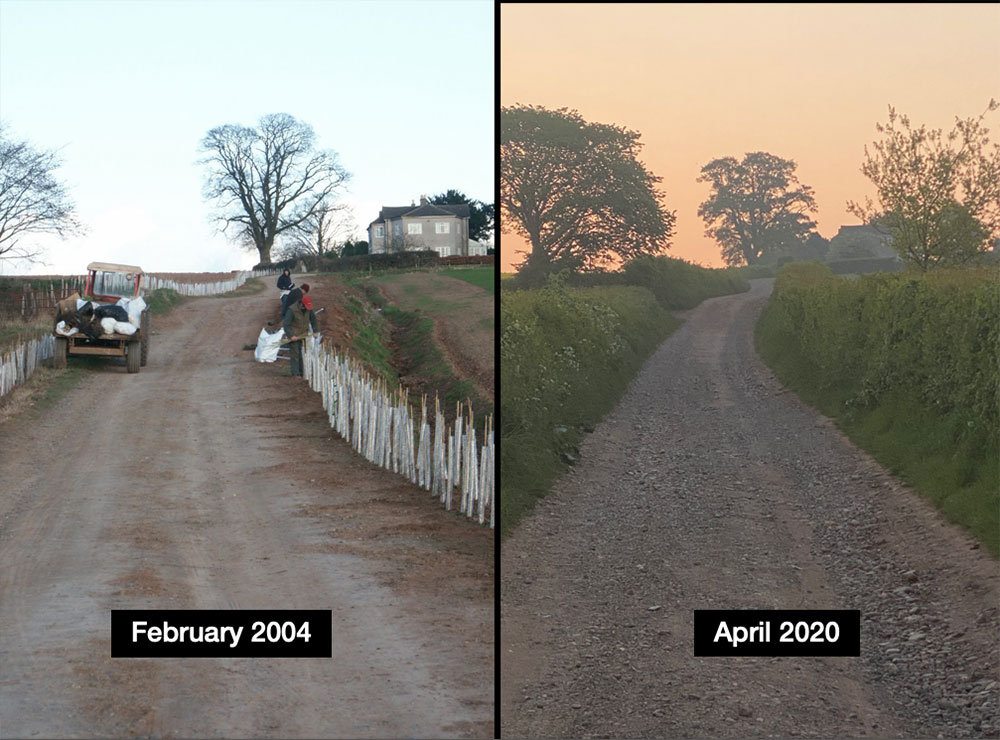 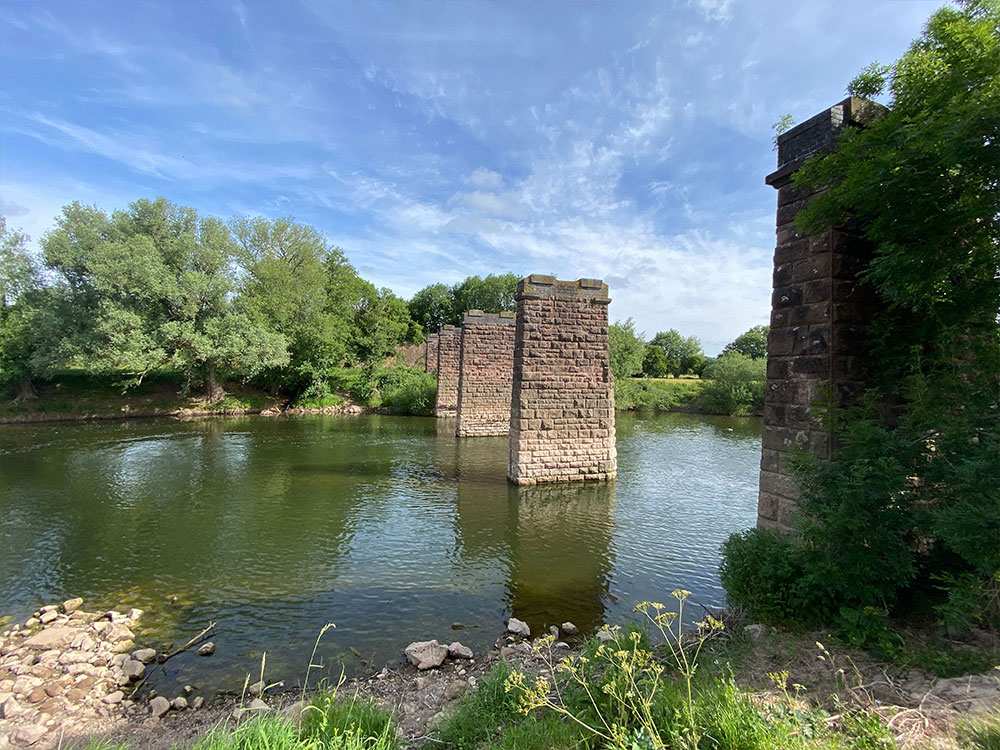 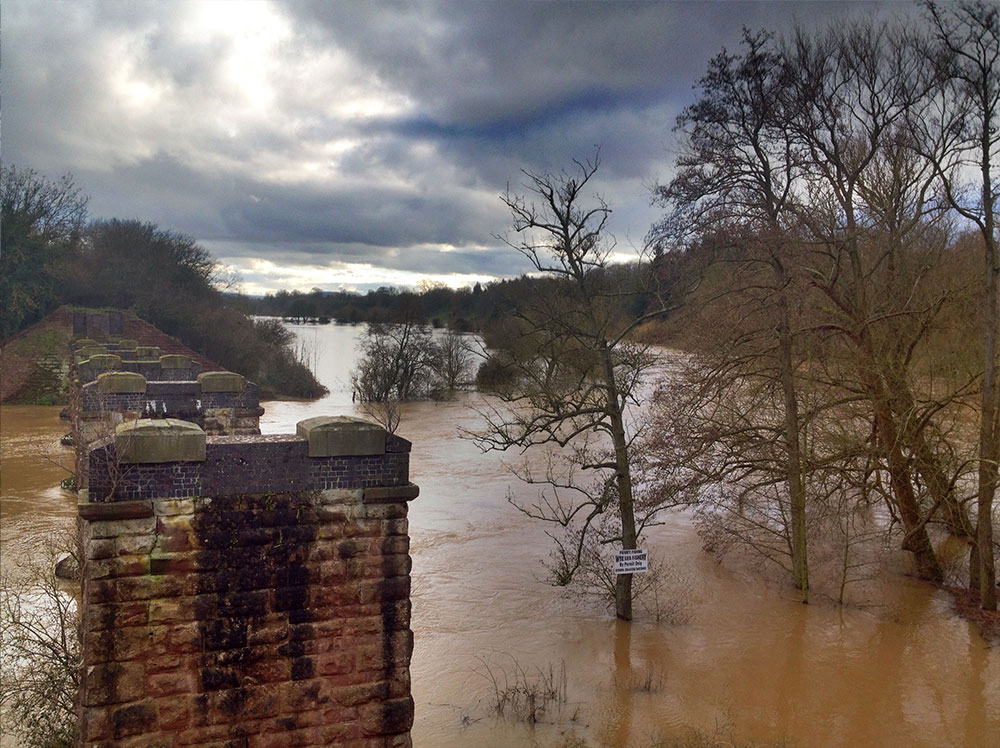 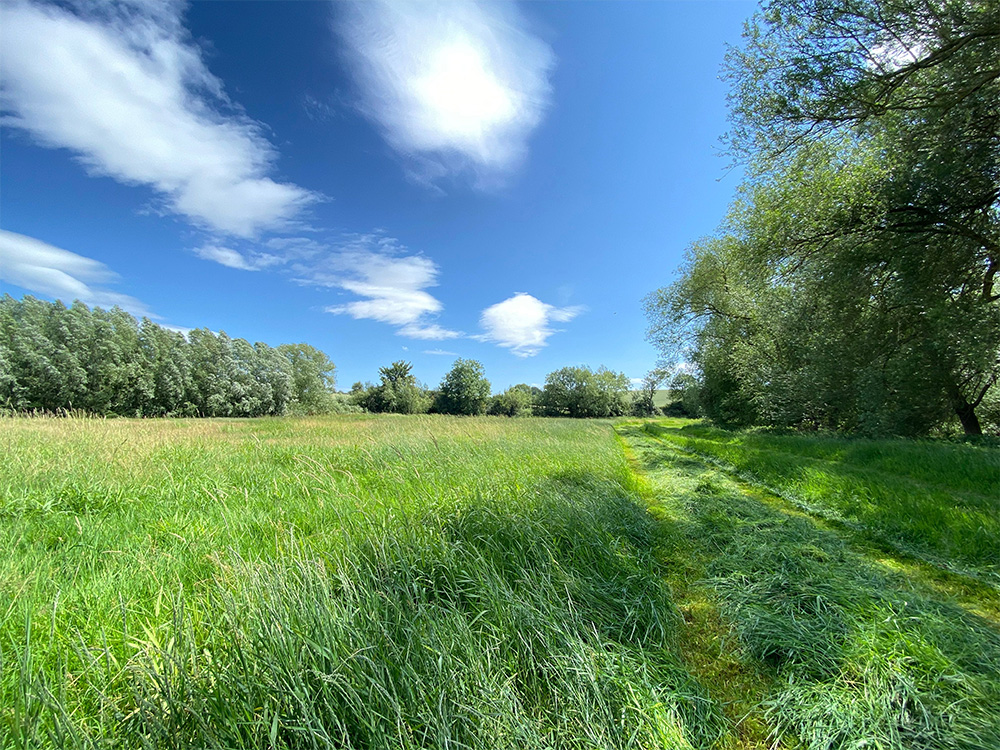 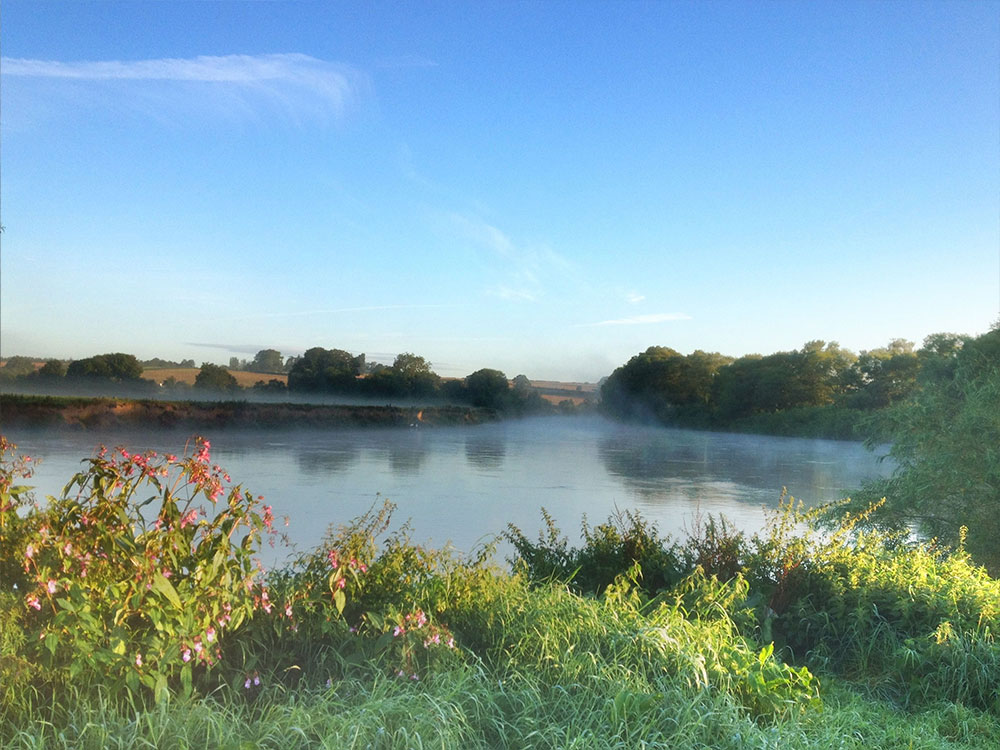